Hall was the Juror’s Award Winner for our exhibition “Open.”  The Juror was Dan Burkholder.

How did you come to photography?

The first thing that really sparked my interest was Life magazine in the 60’s. I would come home from school, get a king sized bottle coke, and kick back in the naugahyde lounger and devour the latest issue. I also really enjoyed looking at old family albums being particularly drawn to how sharp some of them were compared to others. I started working as a photographer in 1979 and would like to say “it’s been downhill ever since”, but I won’t, ’cause it wasn’t. 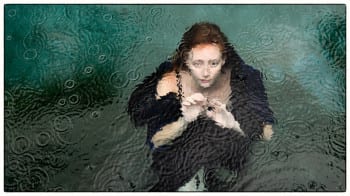 Can you tell us about your images?

I noticed one day that an awful lot of my favorite images I have taken over my lifetime involved water in some form or fashion. My water portraits are a more direct approach to that realization.

Hall, as a professional photographer could you chime in on the analog/digital debate?

When I started out I went out and took a picture with a 35mm camera usually with film never exceeding 400ASA. I then went into the darkroom and “made” a photograph. I got what I wanted as much by happy accident as by a scientific approach to the exposure/development correlation. This changed over time to a certain degree. While I personally considered my skills in the darkroom to exceed or at least be equal to anyone I always found that when making a print that involved a lot of manipulation it was difficult to make more than one exactly the same.

Now, as a commercial photographer, I shoot exclusively in the digital format. While I still hold on to my old 4×5 and have film in the freezer waiting for the affordable return of polaroid, I find that modern technology far exceeds the capability of 35mm Plus X film. Now I go out and take a picture with a DSLR and then I go back to the computer and “make” a photograph. Sometimes it’s what came straight from what I shot. Other times I “burn and dodge” in the same ways I did in the darkroom. The magic being in that once I get it like I want it I can reproduce it exactly forever. The other thing about the new technology is that many modern cameras are now able to capture things in light so low we can barely see it ourselves. How cool is that?