Ray Collins is a miner and an amazing photographer of the oceans topography.  Arthur Meyerson, juror of our recent exhibition “blue”, gave Ray his Juror’s Award for three of his seascapes.  Ray has won many awards and accolades and was recently a short listed finalist for the prestigious Smithsonian Annual Photo Contest.  It is hard to peruse social media these days without coming across Ray’s work.  The following are three questions Kevin posed to Ray concerning his images.

Ray you certainly have made a splash in the photography world recently.  Forgive the pun.  Your images are being admired and debated all over social media and elsewhere. The four we had up in the last exhibition, “water,” were some of the most discussed we have ever hung.   Could you please give us a little background and some insight into your process?

Basically, the image you see is the final link in a chain of events…

I spend hours, days or even weeks and months pouring over weather maps, checking storms, tides, wind, swell, temperature and light. From there I correlate all the information and see where along the coastline my best chances of dynamic waves will be. Most places aren’t user friendly and can often require scaling down cliffs along some treacherous coastlines to reach offshore reefs, usually in the dark so I can make the most of the golden morning light.

Having a heavy pro body camera inside a water housing with a prime telephoto lens can get very heavy at times and as the ocean is pulling and pushing you into and under the waves you have to then focus, compose, adjust shutterspeed, aperture and iso all while staying a float and out of danger, it can often all come unstuck…

But you have seen the end result.

And as long as I draw breath I will continue to push my own boundaries of image making. 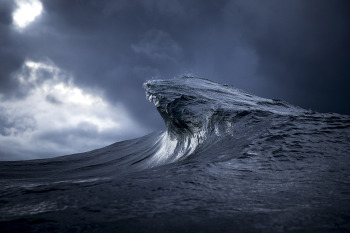 Ray, I understand that you used to be a coal miner.  Your photographs capture light emanating through and reflecting on water, transforming a wave into a prismatic solid on paper — a fixed phenomenon; no longer transitory or fleeting.  Did your time underground in a world void of natural light inform or influence your photography?

Still am a coal miner in fact! I want to freeze the ephemeral. I want to show my relationship with the ocean as it is all I have ever known. I feel an intimacy when I am immersed and I want to show that. I’m not sure there is a direct parallel between coalmining and ocean photography, but in saying that… The photos have me woven through them, my interpretation, myself, and I’ve been working 12hr shifts underground for 12 years now so that has influenced me as a human and most probably transferred into the images I make. It would be cool to see a parallel universe of what my images would look like if I never worked in the mines, how different they might be. But tearing my knee at work underground in 2007 is what led me to buying my first camera so it’s an impossibility. 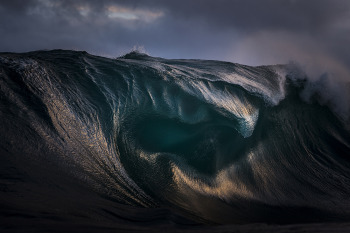 I know that you are a surfer, as someone that briefly dabbled at surfing as a young man, the two things that I took away from attempting to ride waves was the understanding of the raw power of moving water and the undeniable rhythm and cadence of breaking surf.  Your photographs render the ocean beautifully static and solid.  Is there something of rock here or am I overanalyzing? 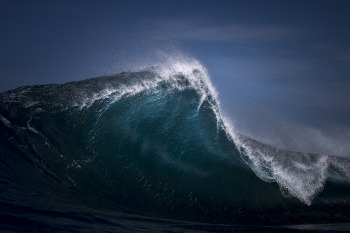