Rembrandt and Sam Abell travel with us as we look at George Nobechi’s photographs. In George’s case the darkening of the shapes, for looking at shapes and their relation to one another is ultimately, subconsciously what we do after identifying or attempting to identify the content, doesn’t add mystery, it adds weight and presence.

Many of George’s photographs take the commonplace and paint it with darkness and black and consequently our photographic mind is expecting contrast and explosions of light but what we get instead is calm. His work is ironic in that we instinctively expect a variety of penumbras, yet the shapes sit next to each other, distinct, the placing of one fully made thought on top of another. 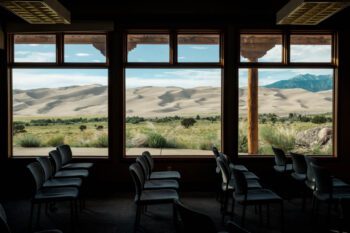 Windows are ancient, ubiquitous architectural elements. They existed before there was a word for them in the shelter/architectural lexicon. Early man looked out from the cave or wikiup or igloo through an opening in the various kinds of shelter — a liminal space between safety, warmth, family and everything else. A known world existed on both sides of the opening but not at the same time. One is either on one side or the other. Each distinct. Each carrying its unique sensations. 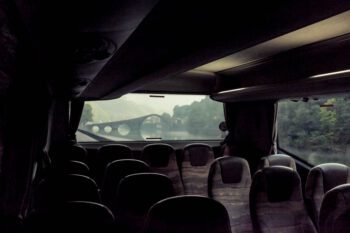 George’s windows do carry both worlds simultaneously. His images allow us to be both looking out and looking in. We are not confused or influenced by changes in temperature, wind or rain. 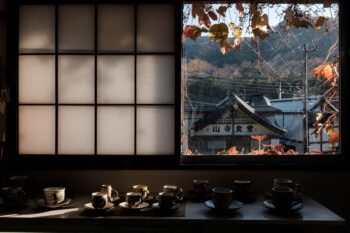 So, inhabiting the space between the two worlds – we chose and then, chose again.

Kevin:  First, thanks so much for giving us the opportunity to have your work in the gallery. So, there have been numerous visitors to the gallery comment on the duality of your images. George, the obvious question would be – does that have something to do with your dual heritage and life both in the States and Japan, or is that too easy?

George: Thank you, Kevin and Amanda, for giving me the opportunity to exhibit with you as well. The duality that comes from my dual heritage is an omnipresent breadcrumb in my work. It is probably the most readily identifiable element, just as the most readily identifiable adjectives may be quiet, or dark. But as you’ve alluded, it runs deeper than that starting point. In Asian garden architecture, one of the key tools of design is the borrowed landscape where what is beyond the confines of the garden becomes an integrated part of the scenery. Your garden doesn’t end with the physical confines of your wall, but continues on visually with the landscape beyond.

In this body of work, I have applied a similar sense of two worlds that comes from the scenes within the interior spaces and the landscapes beyond the window. This brings forth the sense of duality of which you and your viewers speak.

But there is also more to it than simply being of two cultures, but this body of work also speaks to a time when I was between two worlds: when I left finance and as I discovered myself as a photographer. While the scenes in these photographs are calm, quiet, still, there is also a tension and uneasiness that comes from straddling the line between the two worlds. I chose windows to express this tension in a way that a door does not. A door invites us to open it and step forth into the next space. A window, instead, leaves us with a certain sense of distance and disconnection – a sense of being so close to a scene, but not physically being part of it, and that is a crucial component to the duality that people may feel. We are both comforted and made to feel tense. But it is my hope that this duality is also what keeps people coming back to view the photographs over and over—that you can’t take it all in and memorize them in one viewing, and that you won’t tire of them, even if they make you feel mixed emotions. 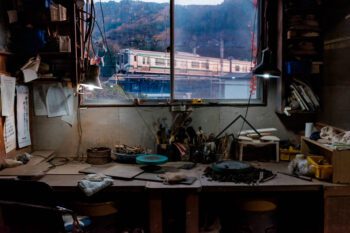 Kevin: Distance and alienation are omnipresent themes, motifs in art. Japanese art has a simplicity, a quietness that can mask a complicated aesthetic — the quiet celebration of beauty for beauty’s sake while also a screen for emotions and conflict. This theme is present in the Japanese authors, Kawabata and Mishima.  Can we get a bit deeper into how your life in Japan has influenced your work?

George: Ooh, you’ve gone very dark there with your choices of authors, Kevin, albeit they are two of the few with the most international notoriety. I’m not as big on Mishima, but Kawabata still haunts me (from my studies in school). I would also recommend looking into Kenji Miyazawa for a Japanese take on magical realism — he’s an enormous influence on my work, and also Natsume Soseki for something a little bit lighter in fare. And then you have the dark authors like Oe, Dazai, and so on.

I find that while I may have a Western mindset – individualism, independent thought and so on (although these are both very much stereotypes), I have a more Japanese heart. That is revealed in the way I look at things. For example: mono-no-aware is at the heart of everything artistic – the nature of impermanence and the idea that a photograph might try to access “forever.” But even in two-dimensional space, with time seemingly frozen by a click of the shutter, our relationship with the photograph changes over time. The things we feel now from looking out of windows at the world have evolved, for example, since we all became confined to our spaces at the start of the pandemic.

Artists in both the West and East have tried to express this sense of impermanence. But the Japanese culture is intensely inward-looking, more so than Western culture. And that allows us to consider the most mundane and common of things to be potential subjects for our work. I am no different in that regard.

There is another concept: “ichi-go, ichi-e” – which roughly translates to one life, one meeting. The idea is that every encounter with another should be treated with the respect and appreciation that is afforded to something that happens only once in one’s lifetime. And if you think about it, that is true. If I met you for coffee today and we talked about something of interest to both of us, and we met again for coffee tomorrow, aside from a possible feeling of deja vu, each meeting would indeed be for that time only. We may talk about different subjects, or the same ones, but while in different moods or while having considered the perspective of the other person from the day before. Photographers, of course, are already on to this, even if it is only in our subconscious minds. The act of clicking the shutter is an act of trying to memorialize that one precious moment. 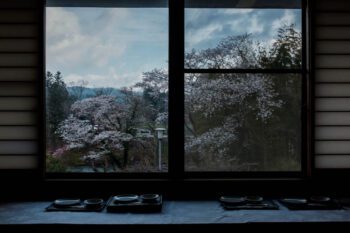 Kevin:  Ha, ha, well it was over forty years ago I read those authors — I will take your recommendations. George, indulge me this question. It’s a bit off the trail, but maybe not. Looking at your work brought up long ago discussions.

Much of your imagery has kinship with the paintings of Rembrandt in that you both create a questioning, one could say a celebration, of negative space with black in your work.

I studied Architecture and Landscape Architecture as a young man.  It was never said that we should consider the other structures or landscapes around our designs, albeit hypothetical exercises. At some point I read a book titled, “The Tao of Architecture,” which posited that negative space is as important as positive space. This was most definitely mind expanding artistically.

George: Well, I want to first say thank you for mentioning me in the same breath as Rembrandt, but of course I don’t see my work in that class. I want to make that much clear. And I wouldn’t necessarily have thought to count him among my influences. Hokusai, yes. Vermeer also. Hopper, and even Rothko; however, yes, I see where you are going with that. I did have a chance to view “The Night Watch” in Amsterdam in 2015 when I first began to make this body of work and perhaps some of that had crept in somewhere along the way.

More on the role of darkness in a moment, but first with respect to “ma” and negative space. “Ma” means several things: room (as in a room), pause (as in between musical notes), and other things. The kanji or Chinese character for it is represented by the character for the “sun” found in between the character for “gate.” It’s interesting to think about those roots. If you ever come to Japan you will see this practice in action in the architecture, garden and landscape design and virtually everywhere you see. You will also see it in the minimalist art styles that are pervasive in this country.

However, if you look at my work, particularly this series, you will see that many of the images are filled with details right to the corners of the frames. That could be my Western half revealing itself, at odds with the Eastern, and there is your duality again, but the way I see it, the clutter of the interior spaces represents the clutter in our minds…the sort of “baggage” of sorts we carry with us as we age and go through life…memories, both good and bad, thoughts, both basic and refined. And then outside there is a sense of purity.

Now back to the darkness- well, that is part of the vignette that exists in our minds. What’s in front of us is clear enough, but the periphery is in shadow, as if memory were a circle and expanded out from the center, rather than linear. The details fade into shadow toward the edges. No, these images aren’t HDR and the shadows are left as close to how our eyes would perceive that space because I want everything to be real. The shadows, the blacks, they take on a presence and give weight to the images, and so I consider it to be a little different from “ma” in this case.

As for the Sam Abell influence, well, he might just have a famous window photograph or two, certainly (wink! – look up “Sam Abell pears” if you don’t know what I mean). Although in that photograph he has placed pears to make a poetic “still life linked to a landscape,” and all my photographs in this series are found spaces. But speaking of spaces, Sam does make use of space very well, especially when there is not much available: he creates the illusion of space and he layers his images, which is something I learned from him. In this series, I’ve made still scenes of everyday life linked to the landscape beyond the window because of that longing we all feel to go outside and be participants in life, but so often the dark thoughts, memories, and the presence of people also weigh equally against the life that is on display in front of us. And that inner space becomes a comforting cloak in which to wrap ourselves, warm and dark, and finally, we look toward where the light comes in—from the window, of course. 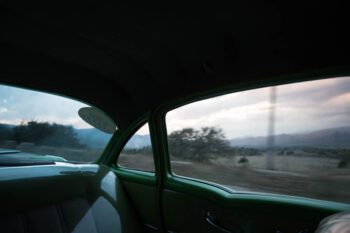 Kevin: George thanks for traveling along with me in this discussion. Do you have anything you would like to add in parting?

George: I would just say, in parting, thank you for the warm hospitality and for all that you and Amanda do for the photographic community.