Eddy Verloes is a Belgian photographer. I chose his image, “Apocalypse Now”, a dramatic, arresting black and white image of trees and clouds and water, for our recent exhibition, “Trees.”  He first came to my attention with a black and white image he had in our “Life” exhibition, juried by Alyssa Coppleman, of Orthodox Jewish men playing on the beach. It was titled, “Losing our Minds.” Amanda and I gave it the Director’s award. It reminded me of the work of the French photographers Cartier- Bresson and Robert Doisneau, but it also had a bit of Monty Python in it. 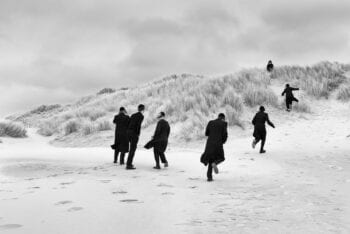 As I was hanging the exhibit, I kept going back to it. It was truly joyful. It was a smile generator during the pandemic. In my opinion, it accomplished much of what a work of art should – it wouldn’t let you walk by and it proudly evoked an emotion. How many folks just walk by “Guernica” or can’t feel good looking at Wayne Thiebaud’s cakes?

Eddy is an award-winning visual storyteller. He asks us not to put him in a box on the home page of his website – not possible.

Kevin: Hi Eddy, can you tell us a little bit about yourself and how you came to photography?

Eddy: I am a Belgian photographer and started with photography about 8 years ago after I stopped as organizer of a big musical event “Leuven Plaza Proms” in Belgium. I studied literature, philosophy and arts at the University of Louvain (Belgium) and the Albert-Ludwigs-Universität Freiburg i.B. (Germany). I published four books: ‘No time to Verloes’ (2015), ‘Cuba libre’ (2016), ‘Zeezuchten’ (2020) and ‘Losing Our Minds/Buiten zinnen’ (2021).

The first time I felt like a photographer was two years ago when I took a series of ultra-Orthodox Jews on the Belgian coast who enjoyed their freedom in an unorthodox way in the storm (of their lives) and escaped the lockdown. This series has been traveling around the world for more than a year.

I really like the work of many photographers, and in some of them I see similarities to my style of photographing, especially when they have a kind of humour in their photographs.  Martin Parr is one of my idols in street photography. He has been photographing beach life over many decades and in many countries. One of the reasons why I love his work so much is that his photographs have strong statements about society – and always has a certain viewpoint or critique. Many of his photographs are funny, interesting, or sometimes downright depressing. He interjects his own opinion and thought into his photographs and shows how he sees the world – and challenges us to see the world differently as well. When looking at Martin Parr’s photography, the viewer is often unsure whether to laugh or to cry. He finds the extraordinary in the ordinary. In some of my photos I found an inspiration in him. Other photographers I like very much are: Harry Gruyaert and the surrealism of his work.  I love his book “Roots” about the banality of the beautiful, the beauty of ugliness of … Belgium.  Stefan Vanfleteren with his book “Belgium” which is a subjective photographic documentary about Belgium in B & W. Josef Koudelka because of his unusual point of view, the magic of street photography of Saul Leiter, the importance of composition in the work of Martine  Franck, the photographs of Jehsong Baak which are a reflection of his many travels and testimony of his incisive eye. His velvety ink-like images bring to mind artists such as Bill Brandt and Man Ray, where the night, the dark and the light are surrounded by a symbolist air.

To me, photography is an art of observation. It’s about finding something interesting in an ordinary place. You just have to care about what’s around you and have a concern with humanity and the human comedy.

First rule to be a photographer, you have to be invisible. I don’t need to have a kind of relationship with my subject and I don’t need to prepare my locations. I do a lot of street photography. The essence of street photography is about documenting everyday life and society on the streets. It’s a genre of photography usually done candidly without permission and without your subject’s knowledge. The most spontaneous photos are for me the most interesting. The important thing with street photography is to have fun and enjoy going out with your camera. My goal is to capture emotion, humanity and sometimes depict a person’s character. Perception and intuition are the most important factors. Perception requires a creative eye for detail. Intuition is immediate and is not duty-bound to any attentive reasoning. These two factors are combined to create the “decisive moment”, an amazing process that takes your images to the next level. To me, the greatest moments in life are the ones right in front of you. I agree with Henri Cartier-Bresson, one of my favorites, who says that photography is the simultaneous recognition in a fraction of a second of the significance of an event. 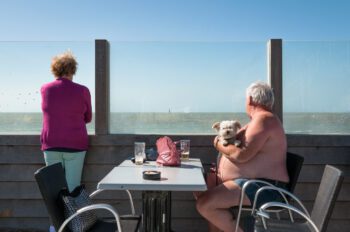 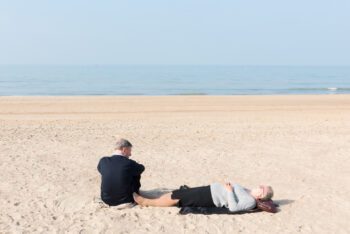 Kevin: You have had significant photographic accomplishments in just eight years. Reading what you said above – are you a musician?  You mention Man Ray, a personal art hero of mine. He was a creative polymath. Did you study art at some point? If so, what non-photographer artist would best define your personal aesthetic?

Eddy: I have a lot of affinity with painters as Edward Hopper, Léon Spilliaert, Caspar David Friedrich, Leszek Skurski and writers as Samuel Becket and Franz Kafka.

Aloneness is a great theme in Hopper’s work and also in my photos. Though termed a realist, Hopper is more properly a symbolist, investing appearance with clenched, melancholy subjectivity. He was masterly as a painter of light and shadow, but he ruthlessly subordinated aesthetic pleasure to the compacted description of things that answered to his feelings without exposing them. He leaves us alone with our own solitude, taking our breath away and not giving it back. 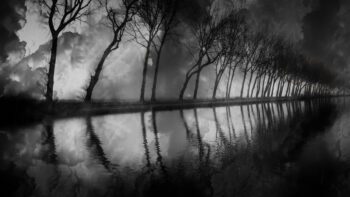 Once you’ve seen a Hopper, it stays seen, lodged in your mind’s eye. I also see a connection between Hopper and Alfred Hitchcock. The emotional tug of many of Hitchcock’s characters and all of Hopper’s requires their unawareness of being looked at. Hopper shows how, exploring a condition in which, by being separate, we belong together.

I think my photos “My eternal love” and “Mother, why are we living?” express the same atmosphere.

The inside and outside world in the paintings of Edward Hopper is a permanent source of inspiration for my photography; they are a reflection about the relationship between our ‘interior’ and ‘exterior’ lives and emotions. With my deserted, misty landscapes and isolated figures in strange rooms behind worn curtains I try to capture the loneliness, alienation and mystery of modern life. And the pandemic has given my photos a terrifying new significance. The solitary figures or even couples in my photos are often only shadows of themselves. I mostly use shadows or silhouettes to ‘hide’ or ‘keep outside’ information about the subject. Being in a room, a place or a landscape is to simultaneously inhabit two worlds: the one before us and the one inside us. The relationship of the viewer with the landscape or the room isn’t purely one of the physical dependencies, but it’s also spiritual and emotional. During these corona times, we were confronted more than ever with ourselves and with the mystery of nature. Reflection is needed more than ever. Kevin: Thanks for your thoughtful responses Eddy.